Manzherók (southern altaic Ман-журек — watch hill or foggy hill) — A village in the territory of the Manzherok rural settlement of the Mayminsky municipal district of the Altai Republic of Russia. It is located on the bank of the Katun River, 34 km from the village of Maimy, 470 km from the Chuysky tract.

It was founded in 1856 by peasants-settlers. Local Altai-nomads, looking at Russians who lived settled, began to settle in the village. There were mixed marriages. By 1875, Manzherok became a major settlement.

In the same year, the Maymine trader Efim Chendekov built a church, giving her his name. On October 15, on Efimov's day, he came to the village, on this occasion a moleben served. By the 1890s, there were 35 households in Manzherok, of which 7 belonged to indigenous Russians. 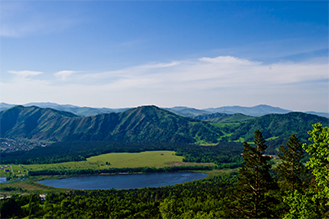 Before the revolution, the main occupation of the inhabitants was cattle breeding. A few were engaged in agriculture: they sowed oats, millet, buckwheat and planted potatoes. Manzherok citizens burned charcoal, lime, smoked tar, tar, chopped wood and fused it in Katun, traded with steppe villages. In 1932 a recreation center was built for workers of the regional committee and the regional executive committee. In 1941, the premises of the base were occupied by a children's camp. In 1963 a pioneer camp was built for them in the name of V.I. Lenin.

In 1966, singer Edita Pieha sang a song called "Manzherok" ("Tell me, my friend, what is Manzherok? .."), dedicated to the festival of Soviet-Mongolian friendship that was held under the village. The song has become very popular.